"Why on earth would somebody want to buy a TR7" I was asked.......... "Why not I replied......."
"There unreliable, the headlights don't pop up, they rot for fun, the head gaskets are weak, and you'll spend more time fixing it than driving it" came the answer, a bit harsh I thought.....

Then I bought one (whilst wearing my rose tinted glasses) of course.

At that point I found out they were just the minor problems what about the front wheel wobble you can't get rid of the creaky dashboard & the the.................. wait a minute get behind the wheel start the engine ,drive and all the problems just melt away.
Driving down the open road, hood down, sun shining and knowing you are behind the wheel of one of Great Britain's most understated, unloved  & most affordable sports cars ever produced with a big cheesy grin on your face.


It doesn't stop there joining the TR Drivers Club / Triumph TR7.com opened new doors & avenues which I didn't realise were part of classic car ownership the people are great the cars are great I just wish I had bought one when I was a bit younger you can never be too young to own a TR7 as my little boy has found out...... 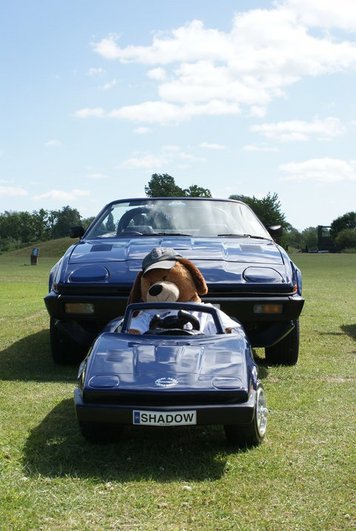 These pedal cars were apparently placed in BL showrooms to coincide with the launch of the TR7 DHC.
Only a few seem to have survived as you can see from the first pic. this one nearly didn't.
They originally had pneumatic tyres & of course pedals for power I believe that most of them were gel coated red although I have read of some white ones were produced to sell in Harrods with bright orange check interiors